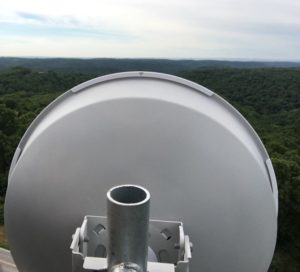 Some practical WiFi applications to consider for your extended business network

If you need to extend your internet/intranet service to a remote building or buildings, or cover a larger area outside – you may want to consider using WiFi to extend your network.

Recently, the staff at Myercom had the exciting opportunity to design and build a large scale WiFi network for a fire department in the Missouri Ozarks. This fire department covers a large geographical area.  The problem they were trying to overcome was the rural areas where their stations were located, had no internet service offerings.

In order to provide connectivity to these remote stations it became necessary to design an Intranet system of Point to Point and Point to Multipoint WiFi links between a mix of existing radio towers, a Fire Observation tower, and freshly built towers at the stations. 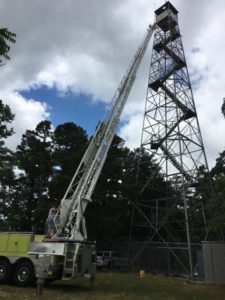 These provided the backbone link between the fire stations so they could communicate via an intranet between those towers.

The longest distance between any connection was 14 km, over very hilly, heavily forested terrain.

At the farthest station we tested the connection by watching a Netflix movie, among other testing tools…

Leading up to this installation we installed WiFi networks at one very large Marina, an on-water restaurant, and at a smaller Marina in the Ozarks. The large Marina encompasses an area of about a quarter square mile on-the-water.

Their needs were to supply WiFi to their on-water store for business purposes, and to also push subscriber access to their house boats, and camping areas. In addition, they are a heavy user of video cameras for maintaining security for their patrons and watching for approaching boats to their gas dock among other things.  We also added a WiFi water temperature sensor, WiFi septic tank sensors, WiFi telephones, and installed a couple of auto-adjusting satellite TV dishes to provide satellite TV for their houseboat patrons.

They also wanted to be able to manage their operation from their home, which is about 4 miles away and was without internet. We constructed a series of two linking towers up and out of the lake cove, over a ridge, and out across the lake to their house several miles away – using WiFi.

Today, we are installing a Point to Point WiFi connection for a Customer between buildings separated by about a ½ mile with a major highway between them. One building is where the internet is located, and the customer wants to extend that internet to a building across the highway that does not have internet service availability.

At the second building the Customer has a business with a store and an RV campground with a large outdoor coverage area.

The plan is to provide WiFi within the store via a Ubiquiti UniFi Access Point. However on the outside things get serious as this customer wants full coverage over the entire RV parking area with good signal penetration through the aluminum skins of the trailers parked there – this is important to them.

The plan is to install a sector antenna at the store for a Point to Multipoint connection to three stations/poles providing a backbone network to specific geographic areas within the park. At these three locations we have Ubiquiti LiteBeam AC radios setup to handle the backbone internet, and using Unifi AC Mesh Access Point radios to propagate out to a specific cell area within the park.  The UniFi radios are managed using a UniFi Cloud Key controller, which provides a WiFi cellular approach, meaning they talk to each other to coordinate and auto adjust signal levels to reduce interference between the other radios.  They determine which cell a WiFi subscriber will connect to for optimum service.

A few years ago Myercom also established a Point to Point WiFi connection between two residences separated by about 4 km in an area populated by forest and rolling hills.

For this installation we installed two 20’ self-supporting towers with Ubiquiti WiFi radios on each to establish the link. The remote residence now has internet where there wasn’t any before.

Many years ago, while working at another company, before WiFi by-the-way, I was involved in the interconnection of an auto dealership to its service building on the other side of the auto lot. At that time the most feasible thing to do was trench a ditch between buildings, then lay a multi conductor, heavily shielded cable in the trench, and make the connections between the buildings.

Today, if you want to do this it is as easy as putting a very small WiFi radio on each building. A fairly easy, quick, and cost effective approach.  I wish we had WiFi then for that project.

Same could be true for the homeowner who wants to connect their pool-house entertainment system to their household internet. Or the homeowner wanting to connect their barn, or outbuilding shop to their home for internet service.  Today, it is the way to go both from a price perspective, and from a long term maintenance aspect.  Want cameras covering your yard – but the best viewing location is way out back – look to Point to Point Wifi to make the connection for you.  Want a notification when someone drives into your long driveway?  Again, Wifi is something you should consider – It is very popular right now for a good reason.

Any questions about how you could use WiFi and Wide Area Networking – give us a call, we would be glad to help. 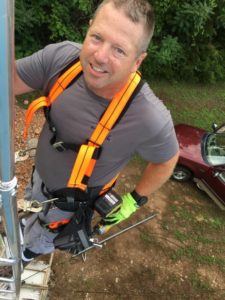